The claims were heard between August 2000 and March 2004. The Tribunal released preliminary reports in 2007 and a final report in November 2008. We were engaged in the Treaty Negotiation process between 2005 and 2010, when we signed a Deed of Settlement which was legislated in 2014.

Our claims relate to tīpuna (ancestors) who exercised their customary rights predominantly in relation to Ngāti Apa ki te Rā Tō in our Area of Interest any time after February 6, 1840. It must be acknowledged that there were also many tīpuna who were never given the opportunity to exercise their customary rights.

Claims to areas in Te Tai Aorere cover a number of transactions throughout the 1800s, namely the New Zealand Company purchases, the Spain Commission, the Nelson Tenths Hearings and the Whakapuaka Claims.

In 1839, the New Zealand Company signed various deeds with iwi that purported to purchase the entire northern South Island. Despite being present on the whenua and enjoying customary use of its lands, Ngāti Apa were not consulted.

Five years later, in 1844, Crown-appointed Commissioner William Spain investigated the Company’s purchases, eventually deeming the Company had made a limited purchase of land in the northern South Island. The Crown then granted further land to the company but again failed to investigate the rights of Ngāti Apa. Ngāti Apa did not receive any payment for their interests or a share in the Nelson Tenths Reserves that were set aside for Māori from the land granted to the Company.

Decades later, at the Whakapuaka hearing of 1883 presided over by the Native Land Court, there were two witnesses representing Ngāti Apa, Ngāti Kuia and Rangitāne: Meihana Kereopa and Hemi Whiro. Meihana Kereopa claimed through occupation, while Hemi Whiro claimed through his ancestor having lived there and through the tukuwhenua of Tutepourangi with Ngāti Koata. The land court, however, overlooked such interests and instead awarded Whakapuaka to a sole individual.

In 1892, claims for the Nelson Tenths lands were heard by the Native Land Court. Ngāti Kuia, Ngāti Apa and Rangitāne again submitted a claim and although they were heard, they were allowed just one witness, Meihana Kereopa. The iwi claimed through ancestry (take tīpuna), occupation (ahi ka), the tuku of Tutepourangi and being present when payments for the land were made. Meihana provided a list of male tīpuna who had been living at Whakatū and Waimea before the colonialist settlers arrived in 1841 and stated that Ngāti Apa, Ngāti Kuia and Rangitāne rangatira Kereopa Karangi, Hamuera Tuhiwairua, Aporo Torohanga were at Matangiawhea, Whakatū in 1844 when Commissioner Spain made payments.

Taitapu is an area important to both hapū of Ngāti Apa ki te Rā Tō. Tipuna Kawana Hunia and others made claims to Te Taitapu upon the Crown moving to purchase the area in 1853. The Crown did not follow up with the purchase but instead bought land under the Pakawau Deed of Sale in 1854. This included Ngāti Apa whenua but excluded Ngāti Apa tīpuna.

In 1883, the Native Land Court determined interests in the Te Taitapu and Whakapuaka lands. There were four witnesses representing Ngāti Apa, Ngāti Kuia and Rangitāne: Hoani Mahuika, Te Wiwini Wiremu (Wiremu Maui), Wirihana Maui, and Meihana Kereopa. Meihana claimed through his ancestors (take tīpuna), who had lived permanently at Whanganui and Te Taitapu before the raids by northern iwi. He stated that he and his mother had left the area for fear of being eaten – and said, "My father was never captured and made a slave, nor I.” Hoani Mahuika claimed through take tīpuna (ancestry) and take ahi ka (occupation). Hoani stated he lived on the land at West Whanganui before and after the raupatu. The rangatira at the time of the raids were Kotuku at Awaruto and Paihora at Tawangawhio. They were his relations and were killed during the raids.

The Waitangi Tribunal and the Government acknowledged the Crown failed to investigate Ngāti Apa ki te Rā Tō claims or ascertain their rights in the broad-sweeping Te Waipounamu Deed of 1850, which purported to purchase all remaining land in the South Island. This failure on the part of the Crown resulted in the extinguishment of Ngāti Apa’s customary rights during the Te Waipounamu purchases, without their consent and without paying them or providing them with even the minimal reserves as made for other tribes. Despite Crown agents meeting Ngati Apa communities at Anamāhanga, Whakitenga and Te Taitapu. Hohepa Te Kiaka pursued his claims to land he resided on at Whakitenga and this was made a reserve for him.

In 1860, Ngāti Apa rangatira Pūaha te Rangi, who often travelled with the Crown negotiator, James Mackay Junior, from Nelson to the West Coast, was a signatory to the Arahura Deed, his rights having been recognised by the Ngāi Tahu signatories. As a result of this purchase, Ngāti Apa were to receive a portion of the payment and a share in some of the reserves in the Kawatiri rohe. In 1864, Occupation Reserves were allocated to Mata Nohinohi, Pūaha Te Rangi, Henare Mahuika and Ramari Pūaha (Te Rarahi). However, these were not only insufficient for the needs of Ngāti Apa, but those managed by the Crown were poorly done so. The four tīpuna were also entitled to the Endowment Reserves which remained under Crown management. Again, these were poorly managed and did not provide a benefit to them.

In 1879, the Smith Commission investigated the reserves. Our tīpuna were not consulted or involved in the investigation and subsequently their interests were not protected, resulting in further loss of land and also loss of control of the scant remaining lands.

A century later, in 1976, the iwi suffered another major setback when our remaining land on the West Coast, including the Westport town sections in which Ngāti Apa held a nine-tenths interest, was unilaterally vested by the Māori Trustee in the Greymouth-based Ngāi Tāhu Mawhera Incorporation.

This was despite the recommendation of a 1973 Commission of Inquiry that identified a distinct Ngāti Apa ki te Rā Tō interest on the West Coast and a need to consult with the iwi over the fate of our lands. This became a major and painful grievance for Ngāti Apa ki te Rā Tō, made more acute by the fact that 5 acres at Anamāhanga was now the only land held by the iwi anywhere in Te Tauihu.

As early as the 1880s it had become clear to the Crown that its policies had rendered Ngāti Apa ki te Rā Tō and other Te Tauihu iwi virtually landless. Lands subsequently awarded to Ngāti Apa ki te Rā Tō at Otaki and Anamāhanga through the South Island Landless Natives Act in the Marlborough Sounds were isolated and useless.

In 1889, Ngāti Apa ki te Rā Tō interests were recognised in a limited way by the Native Land Court in a case involving lands at Anamāhanga (Port Gore). Here, two small reserves (of 298 acres and 5 acres) were awarded to Ngāti Apa ki te Rā Tō whānau on the basis of centuries of unbroken occupation.

However, the bulk of the lands were awarded to Ngāti Hinetuhi, a hapū of Te Ātiawa, who had been absent in Taranaki for 30 years. The 298-acre reserve was sold almost immediately by the poverty-stricken Ngāti Apa owners, leaving just the extremely isolated 5-acre reserve.

By 1900, our Ngāti Apa tīpuna had been rendered landless. The Crown attempted to alleviate their position through the provision of ‘Landless Natives Reserves’ and following the petition of Hoani Mahuika, 10 Ngāti Apa were allocated land at Whakapoai on the Heaphy River on the northern West Coast. However, the Crown never granted them title and the areas promised were later included in the Northwest Nelson State Forest (Kahurangi) Park.

Ultimately, the reserves scheme did nothing to alleviate the landless position of Ngāti Apa in the northern South Island. Indeed, the provision of 'landless natives' reserves for Ngāti Apa ki te Rā Tō and other iwi in Te Waipounamu has been described by the Waitangi Tribunal as nothing more than a 'cruel hoax'.

By the turn of the century, Ngāti Apa ki te Rā Tō were effectively landless and economically marginalised, stripped of our ancestral lands.

Our people continued to be characterised as a defeated, without rights or standing in Te Tauihu. Our whakapapa shows this is a falsehood. But the displacement of our people was done. This was wholly attributable to the failure of the Crown – and not the earlier attacks from the North Island.

That was patently wrong. The Ngāi Tāhu boundary was placed at Kahurangi Point, far to the north of areas traditionally occupied by Ngāti Apa ki te Rā Tō. These boundaries were later incorporated in the Ngāi Tāhu Claim Settlement legislation. Ngāti Apa ki te Rā Tō did all in their power to reverse the Māori Appellate Court decision, including an appeal to the Privy Council in London.

Because of the intricacies of the law Ngāti Apa ki te Rā Tō were unable to re-litigate the historical evidence. Their only avenue was to seek to overturn the decision on technical and administrative grounds. In this they failed.

From the early 1990s, under the tireless leadership of the late kuia Kath Hemi, Ngāti Apa ki te Rā Tō resolved to carry on the fight.

The iwi prepared a comprehensive and detailed body of evidence which was presented to the Waitangi Tribunal at Omaka Marae, near Blenheim, in May 2003. This was the first time since 1840 that Ngāti Apa ki te Rā Tō had been provided with a real opportunity to tell our story.

In its 2008 report, the Tribunal upheld all of Ngāti Apa ki te Rā Tō's claims. The Tribunal found that the Crown's failure to identify and recognise legitimate Ngāti Apa ki te Rā Tō customary interests in Te Tauihu, including the West Coast, had resulted in severe prejudice to the iwi and numerous serious breaches of the Treaty.

The Tribunal recommended substantial redress to settle this ‘unique’ claim. Lengthy negotiations with the Office of Treaty Settlements began in 2005 with Peter Mason as the Ngāti Apa ki te Rā Tō lead negotiator. Finally, on October 29, 2010, then Minister of Treaty Negotiations and Attorney-General, the Hon. Christopher Finlayson, and Ngāti Apa ki te Rā Tō signed a Deed of Settlement in a moving ceremony at Omaka Marae. Just hours before, Kath Hemi signed the Deed from her hospital bed.

The minister said he profoundly regretted the Crown's failure since 1840 to acknowledge the mana and rangatiratanga of Ngāti Apa ki te Rā Tō. The result of this failure had a devastating impact on the social and economic wellbeing of the iwi and its development.

The settlement was a long-awaited vindication of the generations of Ngāti Apa ki te Rā Tō people, including Aunty Kath, who despite almost insurmountable difficulties never gave up the struggle for recognition and justice for her iwi.

A little over three weeks after the signing, Aunty Kath passed away. She was 85. 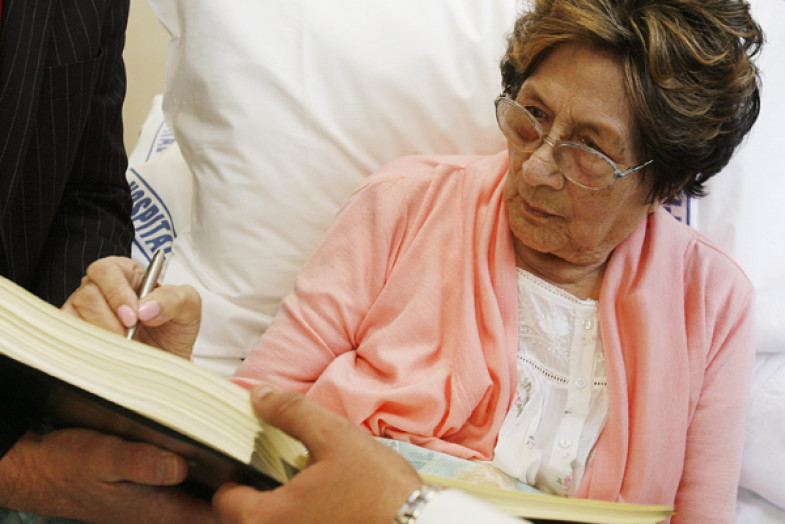 The late Kath Hemi signs the settlement document with the Crown from her hospital bed. Photo: STUFF