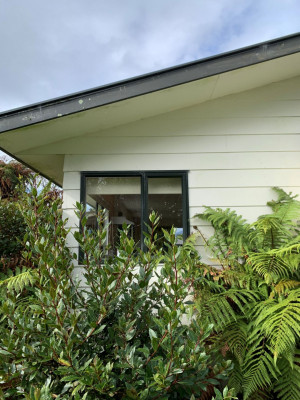 Te Taha o te Awa, located at 2 Greenwood Place in Westport, on the corner with Roebuck Street, is an important site for our Pūaha te Rangi whānau.

It was here that tipuna Hoani Mahuika II built a small whare for his whānau after relocating from another block of whānau land, known as Victoria Pā or the Māori Pā, further up the Kawatiri River.

The land the whare is built on was once in the ownership of the Mahuika whānau but was taken by the Crown under the Public Works Act in the late 1800s to build a hospital. However, a hospital was never built on that location - and the land was never returned to the whānau. The council eventually agreed to, not return, but lease the land back to whānau, and a dwelling was eventually built in 1897.

A century later, between 1999 to 2001, work began on the demolition of the old whare, which was in a  poor state of repair, and a new residential whare was built on the site. The ashes and some timber from the old whare are buried under the house, as a taonga and reminder of the continued occupation of this land.

Some years later, the Ngāti Apa ki te Rā Tō Trusts bought the lease from the council and designated the new dwelling as a facility for use by iwi members. It was named “Te Taha o te Awa”.

Many hapū events such as hapū and whakapapa wānanga and reunions have been held here. Members are also welcome to rent the whare for private use.

Contact the office by phone on 0800 578 900, by email at office@ngatiapakiterato.iwi.nz or via our website to confirm availability.

Once availability has been confirmed, you will be sent a Booking Form with Terms and Conditions, which must be completed, signed, and returned to us, along with payment of the bond, to secure your booking.

Once the bond has been received and the Terms and Conditions read, signed and returned, a digital code to access the property will be provided.